On Family, Money and Memory 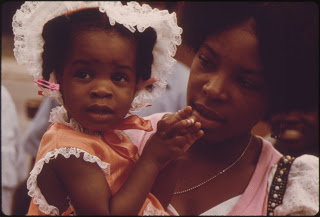 Last week, our guest blogger, Spelman economist, Dr. deGannes Scott wrote a great article about the road to economic freedom.  On that road, many of our families including my own have encountered many obstacles.  Here is an excerpt from my new book, The Weeping Time: Memory and the Largest Slave Auction in American History, in which I reflect on the resilience of
the Black family and the connection between the acquisition of material things and historical memory.  This excerpt follows a discussion in the text of the many Black family reunions taking place across the United States which stand in stark contrast to the sea of negative statistics about modern day Black families.

On an anecdotal level, there are many situations in which parents (married or not) are doing their best to express their love to their children and keep the connection with their families, albeit often in material ways. It may be that the shopkeeper who buys her son $150 Nike sneakers is not just a shameless consumer but someone trying to express her love ironically in the way that our society often emphasizes the most – material things.  The salesperson on a minimum wage salary brags that when her daughter graduates from high school, her father will buy her a new car.  He is not another deadbeat Black Dad she proffers though she is not asked the question.  They may not be married, but their daughter’s graduation in a sea of negative statistics on Black drop- out rates is cause for celebration. Then there is the five year old whose mother of humble means gives a lavish “Hollywood” style birthday party befitting a movie star’s daughter complete with red carpet and professional photos.  Her child’s birthday, she reasons, is cause for celebration. No one asks regarding her dad’s absence. He could be dead. He could be in prison. He could simply be unable to attend.  In the Black community, we learn not to ask regarding parentage.  We learn to celebrate with those who celebrate and mourn with those who mourn.

From my academic and memory obsessed perspective, I used to think that all these gestures were misguided. After all, books, books and more books were what we needed as a people. Or as Thomas Jefferson himself said:  “I cannot live without books.”  But then one day, I looked closer and realized that what I was witnessing was love.  This was a way that some parents tried to show love to their children. This was their way of giving them what in their minds was the very best.

Genealogy, family reunions, and other initiatives go far in filling the gaps created by historical breaches, yet they cannot fully bridge the chasm of loss and displacement of identity and name. Nothing—no car, no pair of sneakers, no video game—can take the place of forefathers forever unknown, of ancestral places never visited, of artifacts, heirlooms and memories never inherited.

This book attempts to put the Black family crisis in historical perspective. It shows that the Black family has proven itself to be incredibly resilient. Out of the ashes of the Weeping Time and slavery, many are putting these fragments of historical memory back together, piece by piece, block by block, brick by brick with faith, fortitude and hope that these missing pieces will represent a surer foundation than material things ever could.