The Journey to Economic Freedom Begins with a Few Basic Steps 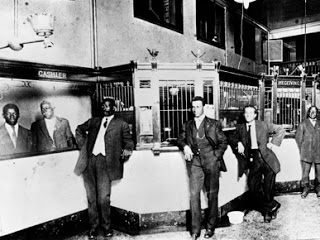 A  Tale of two “O’s”: Oprah and Oseola
If one were to ask the general United States population to name an African American person, male or female, who has achieved economic success, the most probable response would be “Oprah Winfrey.”  Ms. Winfrey is known for her popular daytime talk show that ended in 2011, after 25 years on television.  She is lauded for her generosity and her business savvy.   Oprah Winfrey, college-educated and now a billionaire, is one of many African Americans who has joined the ranks of the moneyed class.
Now, meet Oseola McCarty.  Ms. McCarty was born in Wayne County, Mississippi on March 7, 1908, and died in Hattiesburg on September 26, 1999. She came to the attention of the nation in 1995, when she donated $150,000 to the University of Southern Mississippi, to establish a scholarship fund for needy students.1 In today’s dollars, the $150,000 gift would be valued at $242,000.
Why do I talk about Oprah and Oseola in the same forum?  Is it because of race, gender, generosity? Yes, yes, and yes – both black, both female, both generous!  But, there is more.  Let us take a look at Ms. McCarty’s resume: Education – 6th grade.  Occupation – Domestic Worker.  Work Experience – Washing and ironing clothes.  Salary – No historical record, but as little as $10.00 per week in some years!  Ms. McCarty’s gift to the university was 53% of her life savings of $280,000, which would be worth $452,000 in 2017 dollars.  While, Ms. Winfrey’s resume is more sophisticated and her net worth is much higher, I dare anyone to downplay Ms. McCarty’s achievement.
Let’s talk basics: Economics and Math – Spending and Saving
The latest statistics (2013) indicate that 69% of American adults have less than $1,000 in savings, while 34% do not have any.2   I ask you to juxtapose this information with what we know of Oseola McCarty.  What was her secret?  I contend there is no secret.  Rather, it is a combination of basic economics and mathematics.  Economics tells us that individuals divide their total income between consumption (spending) and saving; in the language of mathematics, saving entails spending less than total income.  Ms. McCarty intuitively and boldly applied these principles, in spite of a marketing culture that encourages mass accumulation of material goods.
I realize there are people who are desperately trying to make ends meet, and I sincerely empathize with them; it is unconscionable that every worker is not paid a living wage.  On the other hand, there are workers who earn a decent income, but who do not have the self-discipline to apply basic economics and mathematics, intuitively or otherwise.
Enter the “sou-sou”: A collective saving system
To individuals who need a push toward economic independence, I bring to you the “asu-su”, also known as “sou-sou”, or “partner” in some Caribbean countries.  This is a collective saving system that
originated in West Africa, survived the journey across the Middle Passage to the Caribbean, and was brought to the United States by Caribbean immigrants.   It brings together a number of people, each of whom agrees to pay a predetermined amount of money, on a recurring basis (weekly or monthly), for a specific period.  The lump-sum of money collected each week or month (the “hand”), is given to a different member of the group.  The heart of the “sou-sou” is the “banker (usually a woman), who vets prospective members, and skillfully manages the collection and distribution of the funds. A “round” ends when each member receives his or her “hand”, and the process starts all over again.  Bear in mind, the “sou-sou” is a long-term enterprise, often with the intergenerational transfer of the position of “banker”.
“Sou-sou” has had its share of detractors, mostly from a bourgeois perspective that encourages engagement with banks.  The major argument is, that group members who receive a later “hand” would do better to deposit their money in a bank for the duration of the “sou-sou”, as the bank pays interest, while the “sou-sou” does not.  I reject this argument.  Banks pay very little interest on savings while charging high interest on loans, making them the only winner in saving/borrowing transactions.

On the road……the journey has begun

People who grew up in the tradition of the “sou-sou” will attest to its utility, having witnessed first-hand how it has impacted lives.   Perhaps, the family used the lump-sum payments to accumulate funds for the down payment on the purchase of a house or to pay for a wedding; for college tuition or to establish a rainy day account.  A successful “sou-sou” thrives on honesty, trust, community, and the desire to save money.  Try it.  I do believe that Ms. McCarty and Ms. Winfrey, the ancestors, and you will be pleased with the result.

From the Desk of…Langston Hughes

Harlem
What happens to a dream deferred?
Does it dry up  like a raisin in the sun?
Or fester like a sore—
And then run?
Does it stink like rotten meat?
Or crust and sugar over—
like a syrupy sweet?
Maybe it just sags
like a heavy load.
or does it explode?
Source: Selected Poems of Langston Hughes (Random House Inc., 1990)

Dr. Roger Abrahams Roger Abrahams, expert on  African and African American folklore traditions, passed away on June 20. Roger Abrahams was a professor at University of Pennsylvania for many years.  I was fortunate to have had him as a teacher and a mentor.   I remember him fondly not only for his brilliance but also his kindness and humility.  His books are terrific and well worth reading:
African folktales: Traditional stories of the Black World  and African American Folktales: Stories from Black Traditions in the New World. Many of these tales are full of wisdom and humor and have been gleaned from sources as diverse as missionary accounts in Africa and inner city lore.

Next week:  Stay tuned for another excerpt of The Weeping Time: Memory and the Largest Slave Auction in American History.
We would love to hear from you!
We publish every weekend.