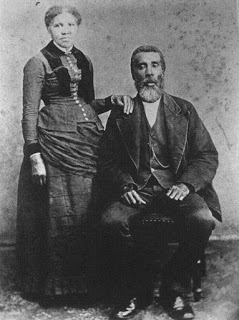 A couple of weeks ago, I wrote about Harriet Tubman’s journey from an oppressed and beleaguered slave to a free woman who then turned around and led others to freedom.  The
turning point for Harriet was when she was faced with perhaps the toughest decision of her life.  At the time that she had escaped slavery in Maryland in 1849, she was married to a free man named John Tubman.  Through a number of clandestine routes, she made her way to Philadelphia.  After two years there, Harriet had saved enough to return to Maryland with the intention of convincing John to come away with her.  She bought him a very fine suit and sent word that she was there. But John sent word back that he had remarried and had no plans to return to Philadelphia with her.
This was a moment of great devastation and disappointment for Harriet but she not only soldiered on, she gave the suit to another man and helped him escape to freedom.  Many of you reacted with horror that John Tubman had made such a choice.  “He did what?” was the general reaction with some of you posting chuckles and knowing smiles.  “He moved on!  He moved on?” How could he marry again when he was already married..and to Harriet Tubman no less!
That was the general sentiment so it is safe to say that most of my readers were on Team Harriet. Well, on one level, I was in complete agreement and I loved reading your reactions to her heartbreaking moment of truth.
At the same time, I couldn’t help but feel a bit for John Tubman.  What was his side of the story?  History does not tell us much, but from what we know of the times, we can guess that it was not easy for him either.   Many things about John Tubman life’s point to the irrationality of slavery, pure and simple.
Imagine, he is a free man but he falls in love with a slave. He marries her but even this marriage may not have been legally binding since many slaves were not allowed the privilege of legal marriage. Furthermore, he cannot live with her like any normal man and wife. He cannot decide when and how to have children. If they do have children, those children are not his…oh no, they belong to the master.  Beginning first in Virginia in 1662, with the other colonies and states following suit, laws were enacted that clearly stated that slavery follows the condition of the mother. This was all the more ironic in a patriarchal land but not patriarchal for the man of color.
John Tubman had few rights that a white husband would enjoy. More than anything, he could not stop the beatings or other kinds of punishments meted out to his wife because she was not his.  The only option for someone in his position would have been to try to purchase his wife from the master.  Still, this was not a foregone conclusion because: 1) the master would have to agree and 2) the cost might be
prohibitive. Whatever small income he was able to eke out would not likely have been enough. So.,.. does this excuse Mr. John Tubman from finding
another love in the two years that Harriet was away?  Was he right to seemingly forget all about his wife  without even trying to get word to her that he might marry someone else?  Why didn’t he, as a free man, you may ask, set out to find his wife in the first place? Presumably, if he was free, he had what they call “free papers” which would have allowed him passage to the free states.
But again, as Twelve Years A Slave, the slave narrative turned movie brought so powerfully to light, freedom even for a free man in the time of slavery was not guaranteed.  He could be kidnapped by some nefarious trader; his papers could be destroyed and he would have nothing to prove his free status.  Free people, it turns out, tended not to venture too far away from their place of origin.  Just in case they ran into any trouble, white people in the area who knew them to be free could vouch for them. Such was the rational irrationality of slavery.  So this is all to say, I am still on Team Harriet but I think I have a feeling too for brother John Tubman.  In a crazy system where people had a price and where money was more important than relationships, can we really blame him?