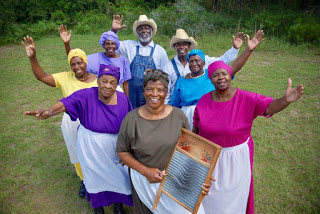 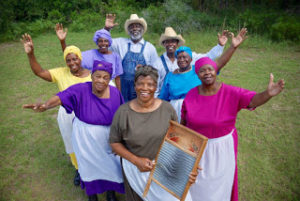 Today, as we approach the second anniversary of Baileyblog, I am reprising the most popular post of our two year tenure which has over half a million views.  I am so thankful that it was picked up all over the country and the world including an article in The New York Times.

It was actually last year  at this time that the song kumbaya was officially recognized at the Capitol on December 7, 2017.  My hearty congratulations to Mr. Griffin Lotson and others who worked so hard to make this happen.

Many a camper in America and around the world know the camp favorite, “kumbaya.”  It is known as a song of peace, a song of community. Few may know, however, that the song was first recorded by descendants of slaves in the Gullah Geechee community of Darien in Southeastern Georgia. Over the last ten years, I have had the pleasure of interviewing and listening to members of this community for my book, The Weeping Time: Memory and the Largest Slave Auction in American History.

The Gullah Geechees have now been credited with the song’s origin and a resolution recognizing Georgia’s first state historical song has been enacted. Gullah Geechee native and Mayor Protem of Darien Georgia, Rev. Griffin Lotson, did the research and with representatives of the Folklife Center in the Library of Congress found the first original wax cylinder recording. Listen to it here.

The story goes that Robert Winslow Gordon, a Harvard graduate who later became the first Head of the Archive of American Song at the Library of Congress, recorded the song in 1926.  Henry Wylie was the singer and a member of the Gullah Geechee community. “Kumbaya” meant “Come by here” in Gullah and was a plea to God for help.  In the interim years, missionaries and folk singers including Pete  Seeger, Joan Baez and Odetta made the song popular around the world, but if we look closely at the lyrics, we see how similar they are to Negro spirituals.  Negro spirituals or as African American scholar, W.E. B. Dubois called them, sorrow songs, were a cry for help.  They were an important part of the oral tradition that allowed the enslaved to share their most intimate desires and needs with God.   They were mostly Christian songs but also sometimes had a subversive message. Coded language in songs were used to help runaway slaves find freedom by means of the Underground Railroad trail. As such, these songs represented their hope for freedom and better days.

Those cries and that hope are heard in the song kumbaya which has finally gotten its due.  The fact that many things in African American culture quietly become mainstream without recognition of their origin makes this long overdue recognition all the more significant.

So next time you sing or hear “kumbaya,” remember this beautiful community and one of their gifts to the world.

Postscript: From Kumbaya to Redemption Song

The lyrics remind us about a time when slaves had only the songs they brought with them.  On that devastating Middle Passage journey, they could not bring their possessions or other things of worth. All they had was in their heads and in their hearts.  Many still kept a song in their hearts -songs that still move the world today.

Old pirates, yes, they rob I
Sold I to the merchant ships
Minutes after they took I
From the bottomless pit
But my hand was made strong
By the hand of the Almighty
We forward in this generation
Triumphantly
Won’t you help to sing
These songs of freedom?
‘Cause all I ever have
Redemption songs
Redemption songs

PLEASE ADD YOUR EMAIL (to the right or below) for new articles every weekend.