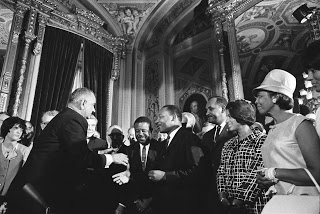 The 1950’s and 1960’s were a turbulent time in America because the issues that led to the American Civil War had not been resolved.   Four million people of African descent who had been enslaved before the War were freed by their own efforts and the Emancipation Proclamation of 1863, but, in spite of Reconstruction, their new status was still not settled.
Families First
What would happen to them? How were they to be incorporated into the body politic? As I have said before in this blog and in my book, The Weeping Time, from the perspective of former slaves, the most important thing was family—finding and reuniting with loved ones and building new lives in this new realm called freedom. During the period of Reconstruction after the war, they were granted citizenship and the right to vote by means of the 14th and 15th Amendments, but because of the backlash and political reversals of 1877, many of those rights were to eroded in the subsequent years.   The advent of segregation and the birth of the KKK during this period underscored the fact that there was some unfinished business after the war.
Fruits of Non Violence
The Civil Rights movement of the 1950’s and 1960’s was essentially about finishing that business: restoring the rights of citizenship which had been fought for and granted all those years before.  The remarkable thing about this movement is that what took war to achieve in the first place and the violence of the KKK to reverse, now was accomplished by the principle of non violence.  The Rev. Dr. Martin Luther King Jr. and other activists with their largely faith based roots marched, protested, desegregated buses, restaurants and other public spaces – without firing one bullet.
Here is a reminder of what they accomplished, some of which is under threat in the present moment:
1956   Desegregation of Transportation Federal District Court rules that discrimination on public transportation is unconstitutional as a result of the Montgomery Bus Boycott.
1964 Civil  Rights Act Federal law forbids discrimination based on race,  sex,  color, religion or national origin; guarantees all citizens equal protection under the law.
1965  Voting Rights Act Federal legislation prohibits racial discrimination in voting.  Specifically, the law prohibits any state or local government from imposing any voting law such as literacy tests or other devices that historically resulted in discrimination against racial or language minorities.
1965 Immigration and Nationality Act On the heels of the Civil Rights Act, immigration was also opened up by means of the Immigration Act of 1965.  This law did
away with the use of national origin quotas (which up to this time largely went to Western and Northern Europeans) and for the first time, accepted immigrants of all nationalities.  Family reunification and those with special skills were given some preference.
These are some of the reasons that America has been repeatedly called “ the leader of the free world.”  These are some of the reasons that America has been greatly admired by peoples and governments around the world with respect to human rights.
All of this was accomplished by non violent means. Is this not worth preserving?