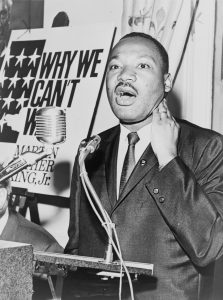 On Martin Luther King Jr.’s holiday, my thoughts are with the children who have been separated from their parents at the border and the 800,000 men and women who have been working for the Federal government without pay for over a month.

This past week, I had the honor of speaking at the 23rd Annual MLK Unity Breakfast at Muskegon Community College and that meant I had to take a flight to Grand Rapids, Michigan.  It was a great event and it was wonderful to see a community, in the spirit of Dr. King, doing everything they can to bring people of diverse backgrounds, ages and expertise together.

I wish I could say that on my travels from New York to Michigan and back I thanked every one of those Transportation Security Administration  (TSA) workers  for their service the way we thank those in the armed forces, but I did not. I tried to be polite and cooperative, but I wish I had said, “Thank you.”   All of the TSA workers I encountered were gracious, helpful and extremely professional.  Had I not known about the shutdown and their lack of a paycheck, I would not have known that they were working so hard..without pay.

So I neglected to say thank you this week so I say it now publicly on MLK Day which is also the second anniversary of Baileyblog. I believe that the Rev. Dr. Martin Luther king Jr. would have been steadfastly behind these people, most of whom are working for only a few dollars above minimum wage.   We sometimes forget that King’s ministry and outreach spread beyond racial lines, particularly at the end.  His last planned march was for a working wage for sanitation workers in Memphis.   He and his team were in the middle of organizing the multiracial Poor People’s campaign.

These were signature causes for him at that stage of his life and career.  So it is in that spirit, I am thankful for the many TSA workers across the country who are doing their job to keep us safe and whose efforts most of the time are unsung, but not today.

Today on Martin Luther King Day, I salute you and I thank you.

And when you discover what you will be in your life, set out to do it as if God Almighty called you at this particular moment in history to do it. Don’t just set out to do a good job. Set out to do such a good job that the living, the dead or the unborn couldn’t do it any better.

From his “What Is Your Life’s Blueprint?” speech at Barratt Junior High School in Philadelphia on October 26, 1967.