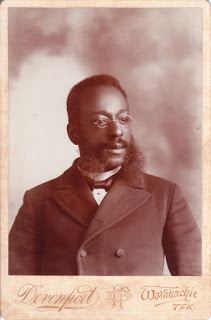 Harriet Tubman was born a slave in Dorchester county in the state of Maryland.  In 1844, while still a slave, she married a free man called John Tubman, but in 1849 upon hearing that she and several of her brothers were to be sold, she planned a daring escape.   She found her way from one safe house to another till she eventually came to Pennsylvania where for the first time she tasted what it was like to be free.
But as it turned out, freedom for herself alone was not enough.  She could not enjoy her freedom without her loved ones.  So she headed back to Maryland through clandestine routes with her first thought being to convince her husband to join her up North.  The story goes that she bought a brand new suit for her husband with her earnings from kitchen work in Philadelphia.  She snuck back into Dorchester County and at a safe house there sent word to her husband inviting him to return with her to the North.
John Tubman, however, would have no part in that little plan. He sent word back that he had married again and was not leaving the county.  Can you imagine the horror that Tubman must have felt?  Here she was with a brand new suit for the man she loved who had effectively moved on.
What happens next is one of the reasons I love Harriet Tubman as much as I do.  We know her as one of the brave conductors of the Underground Railroad, but do we know her as a woman?   That same year, 1851, but in another state, anti- slavery activist, Sojourner Truth was speaking at a Woman’s Convention.  In reference to the starkly different ways black women and white women were treated she boldly asked:  “Aren’t I a woman?”
It is as if Tubman had answered vigorously, “Oh yes I am!”
The records don’t say but in my mind’s eye I imagine her picking out just the right suit, just the right color and fit and pinning her hopes and dreams on the suit and the man that would wear it.   She then voluntarily leaves relative safety in the North to come back for that man only to hear that he has moved on! Moved on?
The best part, however, is what Harriet did next.   I figure she had three choices:
1)     Wallow in self -pity that her man had chosen someone else;
2)     Decide to go back up north and settle into life as a free black or
3)     Give the suit to another man and help him get to the north.
Well, being Harriet Tubman, she chose the third option and the rest is history. It was a real turning point for her and she could have made the wrong turn, but she didn’t. In the end, she did marry again many years later after her countless trips “stealing slaves” from the South.  She married a man 22 years her junior, a civil war veteran like herself whom she met on the battlefield and who built her a brick house after the wooden house on her property burned down.
I am just so glad that she turned the right way.
Sources
Bound for Canaan by Fergus M. Bordewich
Aren’t I a
Woman by  Deborah Gray WhiteAnne Bailey
https://annecbailey.net/

The kind of 19th century suit that Harriet may have bought for her husband.
Picture
credit: https://www.tumblr.com/search/victorian%20african%20americans