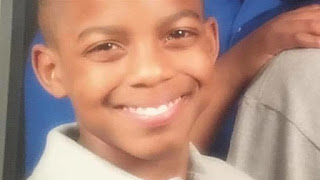 I know and you know that blogposts and Facebook posts don’t save lives. I know they can’t change much that is wrong with the world but when a life is lost for an apparently unjust reason, they do say one thing: that life matters.
Because every word or expression of regret or prayer on behalf of a bereaved family is an acknowledgment that a life snuffed out in a minute is still a life to be honored.  That life is not gone but alive in the memory and the hearts of loved ones.  That God-given life is also alive in the hearts of others moved by their story.
Fifteen-year-old Jordan Edwards was such a life.   Jordan Edwards was shot by an officer in a suburb outside of Dallas on April 29 of this year.  Jordan and his brothers and friends were leaving a party that they feared was getting rowdy.  They got into their vehicle and attempted to drive off but were met with bullets shot by the police car behind them.  The police body cam verified their story and the police department subsequently fired the officer who shot and killed Jordan. That officer is now facing murder charges.
Let that sink in.  That officer is now facing murder charges. We know for complicated reasons young black men die at the hands of each other far too often in our inner cities and that
is just as egregious and needs serious attention. Policemen also lose their lives in the line of duty and that is equally upsetting. But the bottom line is that the police are the professionals.  We need them. We depend on them to protect and serve.
So today and every time that a young man or woman’s life has been cut short in questionable circumstances, I hope to honor them. I hope to remember them in love and recount the story told in Ta Nehisi Coates’ insightful book,  Between the world and me about a young friend whose life was cut short:
Think of all the love poured into him. Think of the gasoline expended, the treads worn carting him to football games, basketball tournaments, and Little League.  Think of the time spent regulating sleepovers.  Think of the surprise birthday parties, the daycare and the reference checks on babysitters. Think of World Book and Childcraft. Think of checks written for family photos.   Think of credit cards checked for vacations. Think of soccer balls, science kits, chemistry sets, racetracks, and model trains.    Think of all the embraces, all the private jokes, customs, greetings, names, dreams, all the shared knowledge and capacity of a black family injected into the vessel of flesh and bone.  And think of how that vessel was taken, shattered on the concrete, and all its holy contents, all that had gone into him, sent flowing back to the earth.
Jordan Edwards’ life matters to his friends and loved ones.
His life also matters to me.