Standing on the Shoulders of Miss Lou and Our Elders 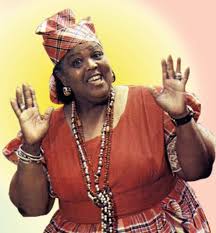 As a child, I remember being transfixed by a Jamaican TV show called “Ring Ding” hosted by a Dr. Louise Bennett who was affectionately called Miss Lou.  Ring Ding was a kind of Jamaican Sesame Street with one major character: Miss Lou.  She presided over groups of students in a school setting and sang heritage songs, told stories and recited poems representing hundreds of years of culture.  She elevated the Jamaican language, patois, to an art form and exposed its multicultural roots at a time when others were ashamed of it.
She was a robust woman with a smile as wide as her face; her expressions ranged from east to west and her hands and feet animated her stories.   It was always an interactive affair.
I remember feeling as if I was one of those children in that studio calling out the answers to her questions or singing along with them – all from the other side of the television screen.
Oh it seemed like a wondrous world – a world in which our Afro-Jamaican culture was celebrated like a fine art.
I remember Miss Lou today as I remember a dear aunt who passed away recently: Mrs. Jasmine Ramsay Archibald, postmistress in the little town of Siloah, Jamaica. She held strong Christian beliefs, and like Miss Lou, was deeply committed to the Jamaican countryside. With her husband, she raised five children to become fine citizens of Jamaica and the Jamaican Diaspora. As I remember Miss Lou today, her son, Geoffrey Archibald’s beautiful eulogy comes to mind:
“Visit your elders now,’ he said, “while they are still alive.”
Honor them, he seemed to be saying, in life and in death.  Remember their contribution. Remember that it is on these shoulders that you stand.
I and countless Jamaicans are standing on Miss Lou’s shoulders right now.  Her contributions and pioneering efforts have made our far humbler ones possible.
No shame. A Fi Wi language. (translation: It’s our language.)
Hear her say it here.
Sources:
Jamaican Labrish (1983)
Aunty Roachy Seh (1993)
Anne C.
Bailey
New book:
The Weeping Time: Memory and the Largest Slave Auction in American History
(Fall, 2017 Cambridge University Press)