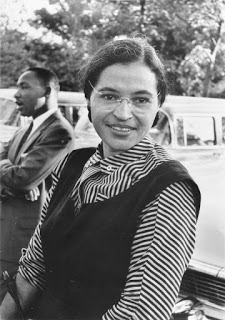 At a time when many in Texas, Florida and elsewhere in the Southeast as well as the Caribbean have lost their homes due to Hurricanes Harvey and Irma, I have become even more aware of the importance of home.
The irony for me as a student of Black history is that one of my greatest heroes never owned a home.  Rosa Parks – who became known to the world through the Montgomery Bus Boycott of 1955 – never owned her own home. She, with the Rev. Dr. Martin Luther King Jr., helped desegregate the buses of Atlanta but never signed her name to a deed. She and her husband never had the pleasure of turning the key to a place they could call their own. They never knew what it was to make home improvements and to see the value of their property increase. They never knew what it was to will their property to their loved ones – thereby leaving them with a physical and psychological legacy and leg up.
Parks, like many in the African Diaspora, was like a wanderer in a strange land.  After Rosa Parks took her fateful stand, as Dr. Jeanne Theoharis shows so beautifully in a recent article in The Root, she was not able to get stable work again in Montgomery. She was, in fact, forced to leave Montgomery and seek work in Detroit. She and her husband never again gained the same financial footing.  For her brave stand, she was labeled a troublemaker and other names—many of the things that activists are being called now for their stand against excessive force against people of African descent or their constructive critiques of the criminal justice system.  She was not hailed as a hero but rather a pariah.  Interestingly, even when all that changed and history books and the general public finally hailed her as a hero, her home, her rental property, that is, was still of no import as a historical site in the land she loved and fought for.
So what does this mean?  Does this mean that those who seek true and full equal rights for people of color and all people should not buy a home?  Should they continue to wander from place to place? Should they continue to sit on the outskirts of life watching it go by like proverbial window shoppers with their noses pressed against the glass?
No. I hope part of the legacy of Rosa Parks is that people of color will strive to settle, in spite of the personal and institutional challenges of such a feat.  We know that prior to the Fair Housing Act of 1968, discriminatory practices in housing and banking were allowed.  Things have changed, but we still live with that legacy, and as such, there are still many challenges to Black home ownership.  I hope, in spite of the challenges, those who can will honor Rosa Parks by continuing to fight the good fight for fair housing.  In a general sense, that is what she and others fought for.  That is in fact what they
sacrificed their lives and livelihoods for.  They denied themselves so others would have better choices and greater access.  But what a sacrifice!
Now there are those who by no fault of their own, due to the vagaries of the weather, also know what it means to be without a home. In the months and years ahead, I am pulling for them as they rebuild and resettle. It’s the American way.
And I am thankful for Rosa Parks who also represented another aspect of the American way–expanding the road for those who came after her to have a place called home.
Anne C. Bailey
New book:  The Weeping Time: Memory and the Largest Slave Auction in American History
Sources:
Jeanne, Theoharis. The Rebellious Life of Rosa Parks.
Audrey McFarlane. “The New Inner City: Class
Transformation, Concentrated Affluence and the Obligations of the Police Power.”
https://www.law.upenn.edu/journals/conlaw/articles/volume8/issue1/McFarlane8U.Pa.J.Const.L.1(2006).pdf