The National Museum of African American History in Washington D.C. 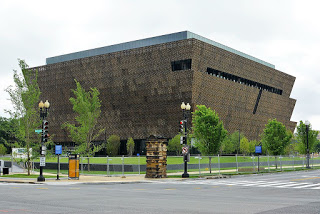 Two weekends ago, one of the curators of the Smithsonian National Museum of  African American History and Culture graciously sent me a ticket to see the museum.  I was in Washington DC for a conference and assumed that it would be impossible to get tickets on short notice. Ever since the opening of the museum in  September of 2016, it has been a sold out affair.  In fact, for months, it was reported that it was impossible to get tickets and that the lines were very always very long.
I considered it particularly good fortune that this was the weekend of the record cold temperatures along the North and South Coast and one of the museum’s curators, Mary Elliott, was attending the same conference.
And so it was that I toured at least one full floor of the museum which has five floors.  I toured the floor on Slavery and Freedom.  In a word, it was excellent. The exhibits told multiple stories starting first with the Atlantic Slave trade and then the development of slavery in North America.  Much care was taken to showcase incredible artifacts from all over the country like an auction block and notices regarding the sale of slaves.
Next to the block there was  THE WEEPING TIME in bold letters and a caption describing the domestic slave trade—where the enslaved were sold from one plantation to another with little regard to family ties. In the end, that was what was so significant about this exhibit: the perspective of the enslaved was captured.   “Ashley’s Sack” was displayed with the explanation that it was items like these that enslaved family members shared with each other upon parting.   They took with them a lock of hair, a swath of clothing… mementos that they undoubtedly held dear.

Images courtesy of  David Gutierrez (wikimedia commons)
Equally moving were the descriptions of African American culture including expressions of music and faith.   Original items like fiddles and banjos (an instrument originating from Africa) were on display as was an actual slave cabin that had been transplanted to the museum.
But this was not just a story about slavery but also a story of the pursuit of freedom.  Every effort was made to capture the stories of slaves who escaped from slavery,  fought for their freedom in the Civil War and  who attempted to piece their lives back together during Reconstruction.
Ironically, the National African American Museum has an almost ideal location – almost exactly opposite from the White House and stands as a reminder that that very house was built by slaves; that the nation itself benefitted greatly from their contributions and the contributions of their descendants.
Hats off to the curators like Mary Elliott and others who did a masterful job in telling this complex and ongoing story.   Hats off to the sponsors – corporate and governmental- who made this dream a reality. May the crowds keep pouring in as they are from far and near.  May they leave this place with new understanding and a commitment and interest in freedom for all.

Author of The Weeping Time: Memory and the Largest Slave Auction in American History, (Cambridge University Press, 2017)
Travel CHANNEL NEWS
Sunday, January 21 at 11am
Thursday, Feb. 8 at 7pm
Anne Bailey returns to  Mysteries of the Museum on the Travel Channel with the story of the Osage investigation- a remarkable story of what happened to a Native American group who enjoyed great wealth in the 1920’s due to discovery of oil wells on their land.
http://www.travelchannel.com/shows/mysteries-at-the-museum/episodes/sergeant-bill-goat-hero-gilded-grudge-and-osage-investigation
See also a  great book on this story:
Killers of the Flower Moon: The Osage Murders and the Birth of the FBI, David Grann.