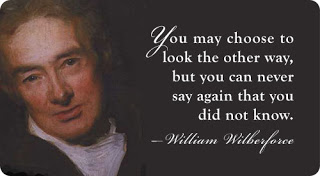 I keep coming back to Harriet Tubman and today I add William Wilberforce to the mix because I am drawn to how they played what I call “the long game” of life.   I know for myself I want things to happen quickly and am often impatient when they don’t.  Most of us probably would prefer an easy win. But these two were given this extraordinary gift—the gift to wait, to persevere and to trust that their aims would be accomplished one day.  Theirs was the gift of hope or as Scripture says, “the evidence of things not seen.”
Let’s first take a look at Wilberforce.   He was born into a wealthy family in Hull in Great Britain.  At age 21, he was elected to Parliament.  He led a fairly normal life for those in his
circle until he met John Newton, the famous slave trader turned preacher who wrote the hymn, “Amazing Grace.”  He then underwent what he called “an intense religious conversion” which altered the shape and scope of his life.  He turned from gambling and other indulgences and devoted all his talents and efforts towards the ending of the Atlantic slave trade and slavery.  From 1789 until 1807, Wilberforce introduced bill after bill to end the slave trade.  In the early days, he was often scoffed at or ignored but he never gave up.  He kept making his case-  bringing evidence from all quarters as to the tragedy of the slave trade.  In one of his first speeches to Parliament, he recounts the following regarding the dreaded Middle Passage journey:
As to their singing, what shall we say when we are told that their songs are songs of lamentation upon their departure which, while they sing, are always in tears, insomuch that one captain (more humane as I should conceive him, therefore, than the rest) threatened one of the women with a flogging, because the mournfulness of her song was too painful for his feelings.
He would not be fully heard till 1807 when the British Parliament formally voted to abolish the slave trade. It had been an 18 year battle but Wilberforce and other abolitionists, black and white alike on both sides of the Atlantic, had prevailed.
Now we come to Harriet Tubman.  Harriet Tubman of course was famous for being one of the preeminent “conductors” of the Underground Railroad.  When the Civil war began, she turned her efforts to working as a nurse, a cook and a spy.  As if that was not enough, after the war, Harriet Tubman settled on a 22 acre property that she had bought in upstate NY and opened up a home for seniors.
From 1865 onwards, Harriet on multiple occasions applied for a pension from the Federal government for her service in the war.   One would think that a pension for a woman who had served her country with such honor for so many years would have been automatic, but it was not.   Harriet sent countless letters directly and through others to the government pleading her
case.  Men of influence like former Secretary of State, William Henry Seward, also advocated on her behalf; bills were introduced on the federal level but to no avail.  Indeed, it was not until 1899 that Harriet finally received a pension for her own personal war service.  It had been a 34 year battle but she did not give up.
The long game.  In these troubled times, Wilberforce and Tubman teach us so many things not the least of which is how to play the long game.
Sources:
William Wilberforce’s 1789 Abolition speech

Harriet Tubman: The Road to Freedom by Catherine Clinton

http://www.harriet-tubman.org/compensation-for-civil-war-services/
Anne C. Bailey
Author of African Voices of the Atlantic Slave trade: Beyond the Silence and the Shame
https://annecbailey.net