America is an idea….that belongs to all of us. 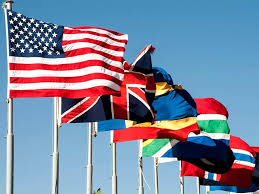 In recent weeks, since President Trump first issued the ban on immigration to the seven majority Muslim countries, there has been quite a bit of backlash.  Some would wonder why but I don’t because it occurred to me lately that America is more than a place. It is an idea—an idea that many around the world are invested in; an idea that belongs to all of us.
I can imagine that some who were born in America and have longstanding roots here might disagree.  America is their home, and it is, so how can someone else from some other place who was not born here believe that they have some kind of “ownership “ of America?  How could that be?  In fact, rationally, it does not make sense.  America is their home and all others are foreigners but this is the strange thing about this special place called America.
Thomas Jefferson, George Washington and the rest of the 55 Founding fathers had no idea ( or did they?) what they were unleashing upon the world .  Did they know that in writing the Declaration of Independence and the American Constitution that others would take hold of these ideas as if they were their own?  Could they have known that America would represent such a beacon of hope to millions, around the world?
I wonder to myself what they would have thought if they could have witnessed a scene I witnessed in Jamaica a few months prior to the 2016 election.  I was in Jamaica on a Fulbright fellowship during the presidential campaign and was looking about my license at the local Department of Motor Vehicles in Kingston.  Like many of these places, there are long lines and there are television overheads all around to distract those waiting on line.  On every set, the televisions were tuned to CNN where details of the campaigns of both Hilary Clinton and Donald Trump were being covered for that day.   It was amazing to see the interest of almost everyone in this crowded government office.  They watched those sets with as much fervor as they watch Jamaican athletic stars competing in track and field events around the world.   All were transfixed by the various ups and downs of each campaign.   “He said what? No, he didn’t say that! “ said one woman.  “ Oh yes he did, “ said another. “Hilary is going to win.. she must win!” said still another.   And so it went. Everyone had an opinion.  For a moment, you would not have believed that most if not all of these people had no opportunity to vote in this election. They were not just keenly interested in the outcome, they acted as if their lives depended on it.   I chuckled to myself just watching them and thinking about how much this place called America means to them.  My next thought was about others elsewhere in the world —in Bangladesh, in Morocco, in Toronto, in  London, in Haiti –watching their television screens with similar interest.
So what does this mean and why was this the case?  We do have national boundaries.  America is a sovereign nation and by right can make its own decisions as to who comes and who stays.  We have laws about these things.  That is her right.  But why does there seem to be a difference here? I say, we need to acknowledge that it is our fault-not just the fault of the Founding Fathers in writing such momentous, pioneering and attractive documents.
We sold America to the world. How can we retreat now?