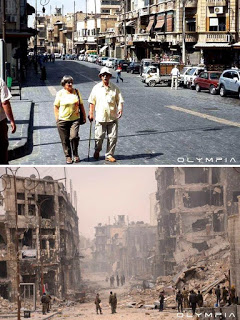 Why Aleppo matters:  The Bell tolls for you and me
Libertarian candidate Gary Johnson was asked on a recent Morning Joe program:  “If elected what would you do about Aleppo? “  He
replied: “ Aleppo, what’s Aleppo?”  It was a perfectly reasonable question –not a question designed to stump someone running for President of  United States.   It was not a trick question for someone seeking the highest office of the land.   Aleppo, one of  Syria’s main cities, has been over the course of the five year civil war at the center of one of the largest humanitarian crises since World War 2.   BBC reporters like Lyse Doucet and many others have been documenting the particularly devastating plight of women and children in the midst of a war that seems to have no clear end in sight.
The fact that Mr. Johnson did not know what it was or where it was is a problem, but it is not just his problem. It is our problem.
To be sure, as a college history professor, I tell my students it is OK if you don’t know something.  I regularly remind them of my own limitations.  No one knows everything yet with the internet and the resources we have at our disposal, we now have access to information at the touch of a button.
But when does not knowing become a matter of not caring enough to know?  Having taught courses on historical tragedies including slavery and genocide, students often wisely ask the following questions with respect to the general public:  What did they know and when did they know it?  And if they knew why did they not do anything about it?  These are questions that come up with the Holocaust as well as other tragedies.  We pore over the newspaper articles of Jews, Poles, Romas and other victims of the Holocaust fleeing Europe to Cuba and other places and wonder: why did we not DO SOMETHING?   Was Hitler’s increasing persecution of  the Jews not known to the public?  Sadly it was though reports of the impending “final solution” were often buried in the flurry of wartime news. (http://learning.blogs.nytimes.com/2013/04/02/the-centurys-bitterest-journalistic-failure-considering-times-coverage-of-the-holocaust/?_r=0)
Flash forward to 2016 and it is the same question all over again.  We were not there then but we are here now.  What is our excuse?  Where are we now in the face or our own national and international tragedies?  Do we face them?
Sadly, if we are honest, most of us including myself go about our business as usual.   We go to work in climate controlled buildings which have never been bombed. We hang wall paper and obsess about the color.  We scour the web and pick out cute children’s toys and clothes.   We enjoy a good game on TV or on the field.  We check our phones and social media for cool updates. We plan our next party. We queue up for the latest version of the latest game or the latest phone.    Essentially, we go about business as usual.  If our hearts are pierced momentarily for the San Bernandino and Orlando shootings, for Ferguson,  for Philando Castille, for Eric Garner, for Keith Scott, for Terence Crutcher and  ..yes for Aleppo’s children, we don’t let it bother us for long.  We may celebrate with those who celebrate but we don’t mourn with those who mourn for very long.
So history repeats itself …again and this time we are witnesses.   History repeats itself  because we fail to look within and see the problem is within us—and our tendency to care first and foremost about ourselves.
So how should we feel?  Guilty?   Mere guilt is useless but I think when our consciences are pricked, we are never more human than in those moments of care, of fear, of concern, of compassion, of love.
Personally,  I feel more human when I connect with those unknown children of Aleppo who I may never meet but who are in my prayers and  in my thoughts as I go about my daily life.  Still I know that even that concern falls woefully short.  I think to myself that if  I were in that situation, I would want someone somewhere to care.   I would want someone somewhere to be thinking of me wondering and figuring out how they could help and how they could be their brother’s keeper.  I would want that.  My guess is that most of us would want that too.
Yet in the midst of it all, there are some bright lights.   I am thankful for our armed forces–many of them on the front lines and unsung except at political rallies and debates.  I am thankful for organizations like Samaritan’s Purse, Doctors without Borders  and Migrant Offshore Aid Station (created by a Katrina survivor) caring for the world’s refugees.  They know where the Aleppos of the world are.  They are today’s Mother Teresas caring for a hurting world.  They are bright lights reminding us of  John Donne’s timeless poem:
Each man’s death diminishes me,
For I am involved in mankind.
Therefore, send not to know
For whom the bell tolls,
It tolls for thee.
Anne C. Bailey
Author, African
Voices of the Atlantic Slave Trade: Beyond the Silence and the Shame (Beacon
Press, 2005)
Associate Professor of History and Africana Studies
Binghamton University
Bauta Green Team Environmental and Educational
Scholarship Program