The Storm is Passing Over and Puerto Rican Resilience

There is a beautiful gospel song called “The storm is passing over” which reminds us that through life’s many storms, the night is dark but when the morning light appears, we know the storm is passing over. This song, written by Charles Albert Tindley, born in Maryland in 1851, the son of a slave, came to my mind in thinking of  the night of  September 20 when Maria brought devastation to the island of Puerto Rico.
One week later, officials of Puerto Rico, US citizens, are still asking for emergency services and help.  The power grid is down.  Over half of the population do not have access to safe drinking water.  Many
are living in the open since roofs all over the island have blown away.   Some of the hospitals are functioning, but many are not.  It is a desperate situation so much so that San Juan’s Mayor, Carmen Yulin Cruz, and others have been begging for more help.
In times like these, in addition to FEMA and US soldiers, many private citizens are rising to the challenge.  Many of the organizations listed below are taking donations and are providing relief.
Puerto Rico will rebuild.  Puerto Rico will rise again.
Tindley’s song is all about hope.  Tindley experienced that hope in his lifetime.  Born at a time when most Blacks in America were enslaved, he himself straddled between freedom and slavery, but the US Civil War changed all that.  He later became a preacher and hymnwriter.   His humble beginnings said nothing about his future.  His storms did pass.  In times like these, I pray those ravaged by recent storms, as well as storms of other natures will take heart:
Courage, my soul, and let us journey on,
Tho’ the night is dark, it won’t be very long.
Thanks be to God, the morning light appears,
And the storm is passing over Hallelujah!
Have a listen here.
Please donate here.
Fondos Unidos de Puerto Rico
P.O. Box 191914
San Juan, PR 00919
tel: (787) 728-8500
fax: (787) 728-7099
http://www.fondosunidos.org/
Caritas Puerto Rico
201 Calle San Jorge
Esquina Baldorioty de Castro
San Juan, Puerto Rico 00902
P.O. Box 8812, San Juan, Puerto Rico 00910-0812
tel: 787 300-4953
http://www.caritas.org/where-caritas-work/latin-america/puerto-rico/
Fundación Comunitaria de Puerto Rico
1719 Ave. Ponce de León
San Juan, PR 00909-1905
tel: 787-721-1037
https://www.fcpr.org/
Hurricane Maria Children’s Relief Fund
Save the Children
501 Kings Highway East, Suite 400,
Fairfield,
CT 06825
https://secure.savethechildren.org/site/c.8rKLIXMGIpI4E/b.9535647/k.A2B9/Hurricane_Maria_Childrens_Relief_Fund/apps/ka/sd/donor.asp
Maria & Irma: Puerto Rico Real-time Recovery Fund
ConPRmetidos
1511 Ave. Ponce de León Suite K, La Ciudadela
San Juan P.R. 00909
tel: 787-773-1100
https://www.generosity.com/emergencies-fundraising/maria-irma-puerto-rico-real-time-recovery-fund
Anne C. Bailey
Author of  The Weeping Time:  Memory and the Largest Slave Auction in American History (Cambridge University Press, 2017)
Sources:
This list is courtesy of LACAS, the Department of Latin American and Caribbean Area Studies at Binghamton University.
Music courtesy of the Detroit Mass Choir
Picture image courtesy of  US Customs and Border
Protection, Public Domain
http://www.christianity.com/church/church-history/timeline/1801-1900/charles-tindleys-faith-set-him-singing-11630487.html
https://hymnary.org/person/Tindley_CA 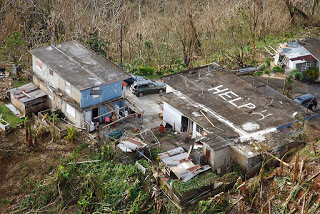