The Day I met James Baldwin at Harvard 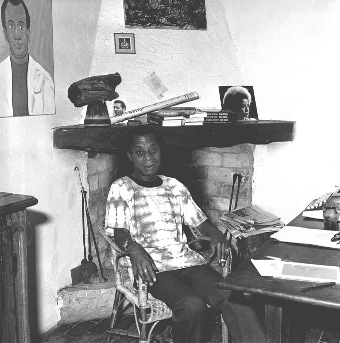 Did I ever tell you about the time I met the writer James Baldwin? I was a junior at Harvard, majoring in English and French with an Africana focus.  I lived in one of the dormitories or houses as we called them on campus.  These houses were vibrant places; not simply a place to eat and sleep but a place where it was not unusual to connect with invited guests who were asked to share their knowledge with the community.  They were run by House Masters, a term I now find curious, but then did not question.  Interestingly, in recent times, these residential college directors have been renamed Faculty Deans.  Often, it would be a married academic couple that resided on the compound and hosted events for the entire community. Academics, writers, artists, all passed through.  Luminaries could be invited to speak to the whole campus or in some cases, as in the case of Baldwin, they would be invited by the House Masters to join us in a more intimate setting.

And so it was that one week in the spring of my junior year, I got a call from the masters of my house, an older white couple, who asked me to join them for dinner with none other than James Baldwin, the famous writer, civil rights activist and one of my heroes.  After enthusiastically saying yes, I remember getting off the phone and rejoicing with my roommates at the thought of this opportunity.  They made me promise to come back and tell them everything.  At the time, none of us speculated as to why I was asked.  Perhaps we all assumed that my concentration in Africana Studies (Black writers in French and English) was one possible reason. I had also worked with them and other Black women on campus to restart a Black woman’s service organization called the Association of Black Radcliffe women. That, too, we thought may have had something to do with it.

So when the day arrived that James Baldwin came to campus, I put on my best dress and took the elevator to the masters’ penthouse apartment like one going to see a true luminary.  At the same time, I felt a sense of familiarity with the man whose books had made such an imprint on my life.  Baldwin’s work was like an awakening.  Nobody Knows my Name, Go tell it on the Mountain, his essays on his literary forays in France –helped me to understand my world. They made me proud of who I was. They were so deeply personal yet historical at the same time, and though it  would be a long time before I found my calling as a historian and a writer, I read Baldwin’s poignant novels then as works of history.

I remember almost leaping out of the elevator with great anticipation.  I rushed to the door and was warmly greeted by the hostess. I looked fervently around to see if I  could spot him.  Slim, in his early sixties but appearing more youthful, he sat at a giant candle lit  table near windows overlooking the budding trees and flowers.  It was spring, and it was not yet dark so you could see that everything was beginning to bloom again.  I don’t remember the rest of the setting, but I do remember that against this beautiful backdrop, he was sitting alone. There were others milling around, but they were not sitting or standing directly next to him.

In that moment, it struck me that other than Baldwin, I was the only Black person in the room.   I am not sure why it struck me as unusual, but perhaps I had gotten used to seeing many Black and brown faces on campus that somehow this stood out.  I was part of one of the most multicultural classes in Harvard’s history. I rarely felt  like “the only one” in most settings on campus, but that evening, I felt that right away.  But I wasn’t going to let that be a problem. What did that matter? I was meeting one of my heroes.

I was about to make my way to the table where he was seated when the hostess took me by the arm….and ushered me to the kitchen.

“Come this way,” she said as she pointed to a tray of hors d’oeuvres that I was to carry.

This is the point where I wish I could report exactly what I said but I can’t. I can only report this feeling of being absolutely crushed in mind and spirit.   I said something, quietly, to the effect of:

“Oh, but I thought I was invited to meet Mr. Baldwin, not to serve…”

I mean, there were jobs in the college like this for students like myself who worked their way through school with part time jobs, but this was not my job.  There was nothing wrong with those jobs, but I worked in the box office of the campus theater. That was my job –selling tickets.

I tried to remember: when she called me the week before to invite me, had I missed something?  Were there other students being asked to serve? No.

The strange thing was that up until this point, my dealings with the House Masters had always been cordial and respectful, not anything of note.  Now here I was, here to meet James Baldwin, the only other Black person in the room, and I was being ushered to the kitchen.

Suddenly, the hostess caught herself and somehow turned it around and invited me instead to stay and have dinner with them. But it was too late. I was crestfallen.

And James Baldwin, ever the astute writer and observer of life, especially life in America, looked across the room and knew it.

He was far enough away that he could not have heard our exchange, but he felt it and he saw it for what it was and gave me the most knowing look with his large piercing eyes that I remember to this day.

The next thing I knew he was ushering me to his side, to his table. I was to sit next to him at dinner. I was to be his guest.

I almost never tell this story. In fact, in thirty years, I have told it only once in a private setting. I think, in my mind, I decided that since it all ended well ––that perhaps it was not such a bad day after all.

Maybe I did not want this story to mar what was overall a phenomenal experience I had at Harvard.  Nothing like that had ever happened before which ironically made it all the more difficult to accept.  Harvard was not just a school.  It was my home for four years, the way any place would have been where you made friends, you ate and slept and worked and played.  I had great classmates, the Class of 1986. But it was more than that.  I felt a connection to the place. The time worn red cobblestones beneath my feet; the smell of flowers that permeated the air in spring after cold Cambridge winters; the thrill of discovery of yet another little library tucked away in a building on the edge of campus with books that had the look, feel and musty smell of first editions. It was my home, and things like this don’t happen in your home. Do they?

Besides, these were the years of President Derek Bok, a great visionary and believer in multicultural education and representation.  It was a pioneering time, but for all of the great vision and all the hard work that brought me there, in that one gesture, my hostess took me back… back there.

Back to that place and that time where that is all I could reasonably expect – that any invite to her home was to serve, not to be served.

Even now, I don’t write in anger because I suppose she was, as we say sometimes, a product of her time, but I wonder as I write and think about the lasting impact of slavery in this country and in the Caribbean, how is it we don’t talk about trauma?  Not just the trauma of the past but the repeated incidents of racism that threaten to bring it all back.

That is what I think about now.  That is what my next book is about; that and how to heal that trauma.

But in the meantime, I can still see James Baldwin’s eyes—fixed on me and my predicament –which was also his predicament and the one he dedicated his life to writing about – those eyes that pulled me in and out of history.

That is my lasting memory.

If you care to, ADD YOUR EMAIL below to receive weekly posts. 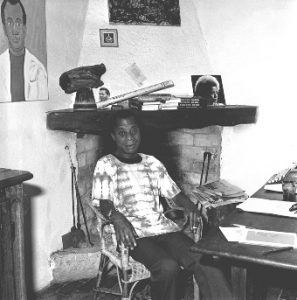