Room with a Beautiful VIEW 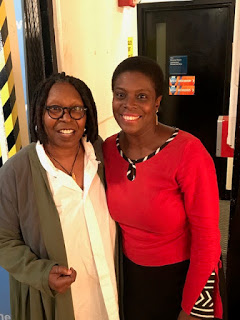 In a divided country and in a divided world, I encountered an oasis this week. I had the pleasure of being in the studio audience of the daytime television program, The View.  The View, created by journalist Barbara Walters in 1997, is a TV program which brings together female co-hosts of different ages and backgrounds to discuss issues of the day.
Fresh off her moving and insightful commencement speech at her alma mater, Binghamton University, co-host, Sunny Hostin, invited me to watch a taping of the show.  In her speech a couple weeks ago, she said many memorable things, but one thing stood out the most.  Through her experience with The View, she shared that she has a fresh new perspective on listening to various points of view.  She has also learned to treasure the relationships that she has with these women even when they fundamentally disagree. It was a challenge for her, and as I listened, a challenge for me too.
Sitting in that audience this week, I could see exactly what she meant, and in fact, saw more than that.  What these women are doing every day is exactly what this country needs right now.  Led by the indomitable Whoopi Goldberg, these women—Sunny Hostin, Megan McCain, Joy Behar and Sara Haines—debated everything from whether it was appropriate for a teacher to have called a student a class clown to whether President Clinton’s affair with Monica Lewinsky in the White House set an awful precedent.  All of the women had strong views on each topic. Furthermore, no one seemed fearful to express themselves. At the same time, they did not have to agree.  The only thing they needed to agree on was HOW they would speak to each other, which was, in a word, respectfully.
I came away impressed with the fact that they have created a space in which people can speak openly yet with civility at a time when there seems to be very few publicspaces like this.  If anything, there is pressure to think one way or another and precious little attempt at listening to others.
At the same time, it is clear that these women have dearly held beliefs.  This is not an exercise in cultural or moral relativism; not at all.  The View, however,  does model for us a public space in which views can be shared and heard without recrimination, name calling and the like.  I particularly like the fact that when these women occasionally err and do not follow their own dictum,(as would anyone) they are brave enough to apologize publicly.  We don’t see much of that these days.
Finally, it is apparent that they all have various pet projects or areas in which they serve the public, but in my mind, what they do every day is a public service.  Modeling how we can be a diverse community and create community at the same time is a public service.
We need this right now.  We need these voices right now. We need this room with a view.
Puerto Rico Update
Since I last wrote about Puerto Rico and the devastation after Hurricane Maria, many have been concerned about the inattention to what the American citizens in Puerto Rico are facing on the ground.  A Harvard University study estimates that thousands have died because of the hurricane.  As such, there has been much more devastation than has been previously reported.
“4,645 deaths can be linked to the hurricane and its immediate aftermath, making the storm far deadlier than previously thought. Official estimates have placed the number of dead at 64, a count that has drawn sharp criticism from experts and local residents and spurred the government to order an independent review that has yet to be completed.”
Many of these deaths occurred due to lack of emergency services or medical attention for those in regions most affected by Hurricane Maria. Puerto Rico and Puerto Ricans are resilient, but this situation still needs urgent attention.