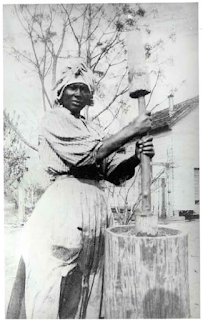 Gullah folklorist Cornelia Bailey died on October 15 and will be remembered for her stalwart commitment to African American culture in the Low Country Sea islands of Georgia.  She will be remembered for preserving that culture –  even when it was in danger of facing extinction.  She will be remembered for inspiring a writer like me to look beyond the wide gate to the narrow, to look beyond the grand narrative to the narratives of ordinary people with an extraordinary history.  A descendant of enslaved Africans in this region, she helped us all to see the nobility of their work and of their contribution to America at large.
Here is an excerpt from my new book, The Weeping Time:Memory and the Largest Slave Auction in American History, which celebrates the culture of rice that once brought prosperity to this region and birthed a heroine who will be greatly missed.

Rice was central to Gullah/Geechee culture.  Even today, it is said by many, “We are Gullah. We’re rice eaters. If we don’t have rice, we’re miserable.” Having enough rice was and is associated with a good life.[i] Slaves relished their monthly rations of rice even if it was difficult back breaking work to plant and to harvest it.  They no doubt inherited this from
their ancestors for whom rice cultivation was a vital part of their identity.  As it is still said on the Rice Coast of Africa: “Unless a meal includes rice, they claim not to have eaten.”[ii]

The rice season started in early March through April with the planting of the crop.  Female slaves like Betsy chattel no. 100,  listed as “ rice hand unsound,” and Dorcas,  chattel no. 278 listed as “rice prime woman,” would drop rice seed into holes in the ground and would tamp down the seeds into the holes with their bare feet.  In fact, it was often a pregnant or at the very least a young woman of child bearing years who would drop the rice seed at planting time.  It was never someone older.

As Cornelia Bailey,  Gullah Geechee folklorist, oral historian and slave descendant says: “You had to thresh all of that rice, and you had to put it in a mortar. You had to winnow it in the large baskets. You were still not allowed to eat any of it. You planted it and harvested and do all that back-breaking work. You could not enjoy it. So the women devised a way of tying the apron around them, and when they tied it up, they tied it in such a way where there was like a pocket here. So when they got the basket and they had took the rice out of the mortar and pestle, put it into the basket for winnowing, then they would shake it up and they’d go:
Peas, peas.
Peas and the rice done done,
uh-huh.
Peas, peas.
Peas and the rice done done,
uh-huh.
And when they go with the “uh-huh”, some of it would always drop inside that apron pocket. So when they went home at night when work was over, they had enough rice to feed their families. And without being caught. So you have to be a little bit ingenious to feed your family. So the ladies were ingenious, of course. That’s the only way you could do it. [iii]
After they dropped the seed, the slaves would then hoe the fields from early June to August.  They used a “fanner” basket to sort the rice grains and separate them from other plant matter.   Finally, they
pounded the rice by hand to take off its husk often with large mortar and pestles from late November to February.[iv]

Woman hulling rice with mortar and pestle in African tradition