In the Debates about Immigration, “Foreign” is also a Noun. 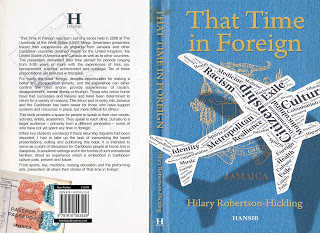 At least once a month, I want to preview a new book.  This month, I am happy to preview That Time In Foreign by my Jamaican colleague, Dr. Hilary Robertson Hickling.
For those not familiar with Jamaican vernacular, yes, foreign can be a noun as well as an adjective. As a noun, it refers to the many places to which Jamaicans have migrated over the years, in particular the US, Canada and the UK.  Hickling’s book is a result of drawing together conference participants on the topic some ten years ago –all of whom spent time in disparate parts of the globe for work, study or permanent residence.  These men and women share in this book all the ups and downs of the migrant experience.  Notwithstanding a number of great successes, many of these returning migrants also share struggles with racism, exclusion and mental illness.
Dr. Hickling has devoted much of her career to studying the impact of migration on those who travel to “foreign,” and in so doing, washes away some of the fantasies of streets paved with gold that in spite of experiences to the contrary remain strong in the minds of many.
Of note, however, are some of the great anecdotes in this book from her own experience in Birmingham, England with her husband and esteemed psychiatrist and scholar, Dr. Fred Hickling.  In the 1990’s, both Hicklings took up residence in Birmingham to address a mental health crisis that had been developing over the years in Britain amongst the African Caribbean immigrant population.  Dr. Fred Hickling was already well known for undertaking groundbreaking research on mental health issues in the Caribbean and became a consultant psychiatrist at the North Birmingham Mental Health Trust.
During this period, Dr. Hilary was also a mentor in a school in the community.  She remembers clearly one black student telling her, “I never met a black doctor.”  Dr. Hilary was taken aback that this young woman whose parents were from Jamaica had no idea of the long tradition of blacks in medicine in Jamaica.  Isolated in a world which was at best ambivalent about her presence, she knew nothing of the tradition of black doctors going back a century–many of whom had studied in England and returned to Jamaica or worked in countries all around the world.
Dr. Hickling could only wonder: What impact did it have on young people mentally – -not to see black doctors in their midst?  To have such a fragmented sense of identity that they did not know that such people even existed.  For one thing, it is clear  that that was one dream that they could NOT envision. We can’t help but see the irony too of people going to foreign for better opportunities and to realize greater dreams yet leaving behind some of the role models that make those dreams seem possible.  This anecdote gives us a taste of the complexity of the migrant experience and the issues it
raises.  It is an important set of voices that Dr. Hickling has unleashed that we need to hear now more than ever when debates about immigration are afoot all around the globe.
No one leaves their country of origin easily. There are costs and there are benefits. This book helps us critically look at both sides with the big picture in mind.   In a broader sense, foreign is a noun. It is a place to negotiate, to contend with and sometimes to fight for – with the goal of gaining a sense of identity and a foothold in a brave new world.
Sources:  This Time in Foreign,  Hilary Robertson-Hickling
See also re: debate about role models:
https://www.nytimes.com/2017/04/20/opinion/where-did-all-the-black-teachers-go.html?_r=0
http://www.sciencedirect.com/science/article/pii/S0272775715000084
Anne C.
Bailey
https://annecbailey.net