From Kumbaya to Forty Acres and A Mule: The Gullah Geechees aim to preserve their land 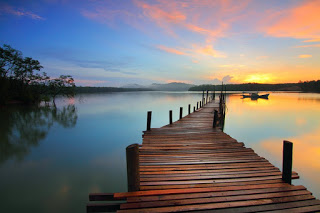 Kumbaya, “Come by here” in the Gullah language, the song of peace, the song of hope, is finally getting its due.  Henry Wylie, a member of the Gullah Geechee community,  recorded the first known version of the song  in 1926.   After my blogpost last week about the song’s origins in the traditions of the Gullah Geechee African American people of Southeastern Georgia, over 400,000 of you viewed the post and voiced your enthusiasm for the Library of Congress, the Georgia Legislature and the United States Congress giving credit where credit is due! A big thanks also to John Eligon of the New York Times, who read this post, reached out to me, Griffin Lotson and others involved in this effort and wrote an excellent piece on the origin and impact of kumbaya.
So many of you wrote poignantly about growing up with this song and how much it meant to you. Many people remembered fondly parents singing the song to them or singing it around a campfire.  Literally, people from all over the world, from Argentina to New Zealand, wrote about its significance in their lives and seemed to bond even more with the song knowing that it was a song borne of pain and suffering but also hope in the African American community.
That the song is a plea to God for help was not lost on most readers; it affirmed how this song speaks to them, especially when they are in pain.
So as we celebrate its origin and its continued impact, I encourage you to support continued efforts of the Gullah community to preserve this incredible culture.  Here’s why this is so important.
The Problem: Gentrification of Gullah lands
Gullah Geechee communities on the Sea Islands are under threat from rising land prices and the practices of predatory developers.
In years past, some developers have used loopholes in the ways in which property is inherited to get the land auctioned to the highest bidder.   With island land now being in high demand, property values have risen sharply and increased property taxes threaten to remove those who have for over two hundred years stayed close to the land and created this culture from which hails this significant song. The Gullah Geechee Heritage Corridor Federal Commission, many of whose commissioners hail from the community, is doing its best to preserve the culture,  but public support for their efforts could make that vital difference.
What can be done?
Should these lands be given landmark status so that the community can maintain their historical and cultural ties to the land? Could a community land trust be started and funded to take the land out of the real estate market and allow it to be managed in ways that help the community?  Maybe this would give communities like Sapelo Island, Harris Neck as well as others the stability they need to plan for the future. Finally, would this ensure that those interested in cultural heritage tourism, and at the moment, that is many of us, would continue to have great places to visit?
People are already flocking by the thousands to the annual Gullah festivals and I can only imagine that more activities like these would be an added boon to the economy of this region.
What do you  the readers think?
Furthermore, could letters to the Georgia Governor, Senators  and  other local elected officials make a difference?  I am wondering out loud if there is a way that public support could help these landowners and culture bearers hold onto their land. After all it is historic land.  This is the case not just because of the song kumbaya but because ironically these lands represent the only instance where African Americans actually received reparations.
Forty Acres and A Mule
In my recent book, The Weeping Time, I document the fact that according Sherman’s infamous Field Order no. 15, on January 16, 1865,  ex slaves on the Sea Islands were granted plots of forty acres by the Union General.  These were the only former slaves who ever received reparations in all of United States.  In fact, there were the only people of African descent in the New World who ever received any reparations at all! Efforts in the Caribbean are afoot, but as of this writing, this reality has not changed. Some 40,000 of the newly freed slaves were to be settled on 400,000 acres of land and given mules for farming which came to be known as “Sherman’s Reservation.”  This meant that the Black people of the Sea Islands experienced something that few others did at this time: freedom with teeth- freedom and property ownership.
They could never be fully repaid for  246 years of unrequited labor, but they were given something to even the playing field.
But it was not to last.
As I say in my book:  “ Sadly, no one could have anticipated that this order could have been so short lived.  Shortly after Lincoln’s assassination on April 14, 1865, President Andrew Johnson  promptly rescinded the order and returned the lands back to their original owners.  It had been a bold experiment, but now it was over.”
The amazing thing is that in spite of this backlash and retrenchment, many Sea Islanders and their families through continued hard work, persistence and banding together, found a way to purchase land near or on their old plantations and hold onto it.
Now some are finding that legacy threatened.
Land and culture go hand in hand. For all our sakes, we hope they can preserve both.
Kumbaya My Lord, Kumbaya 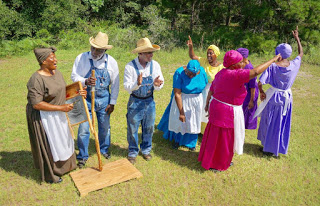 Gullah Geechee Ring Shouters, who share the oral traditions and songs of Southeastern Georgia and the Gullah Geechee community all over the world.
https://www.geecheegullahringshouters.com/ 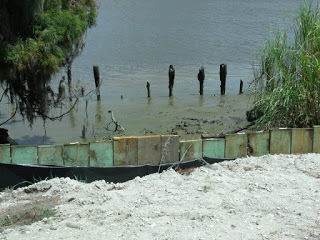 Sources:
A. Bailey, The Weeping Time: Memory and the  Largest Slave Auction in American History
Karen Cook Bell, “African American Freedom and the Illusive Forty Acres and a Mule.”

African American Freedom and the Illusive “Forty Acres and a Mule”