Call them by their Rightful Names: Uniting a Divided America 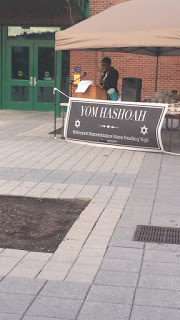 Throughout history, one of the preferred methods of dehumanizing others is the use of derogatory names. This is why the annual Holocaust Remembrance Day that I was honored to be a part of last week is so important.  On the day that commemorates the Warsaw Ghetto Uprising, the names of those who died during the Holocaust are called out.  Each one is singularly remembered –their birthday, their age, their birthplace and their place of death.

Call them by their rightful names. They are not numbers; they are not objects. They are people –people with a past and because of this annual remembrance a present and a future.

For me, the reading of a few pages of the six million Jews who lost their lives was a moving experience and one that captures the spirit of my own work to remember those of African descent who lost their lives to injustice and oppression.There are some who run away from this history, but I feel there is power in honoring in death those who were dishonored in life.

It’s a kind of restitution, if you will, to call out a name who was supposed to be forgotten, but whose identity lives on because WE choose to honor them.  To call them by their rightful names is to turn the tables on evil, to break the silence and to powerfully draw a line in the sand: Never again.

By the same token, there are over 4000 recorded names of men and women who were lynched in America.  Bryan Stevenson, Director of the Equal Justice Initiative and other organizations like the National Juneteenth Observance Foundation are doing much to honor those who died in such a devastating way. Equal Justice Initiative is setting up markers around the country to identify where and how these victims died. The NJOF has an annual memorial service on June 18 in Washington and around the country to honor victims of the “Maafa;” a KiSwahili  term for “terrible occurrence” or “great disaster.”    I hope men and women of good conscience will support these types of memorial efforts.

As they honor the dead, they are calling for reconciliation with the living with the belief that real reconciliation can only be based on a foundation of truth. Our denial will not save us.

Call them by their rightful names.

Call Me by My Rightful Name, a novel by Isidore Okpewho