A Great Time in Savannah! 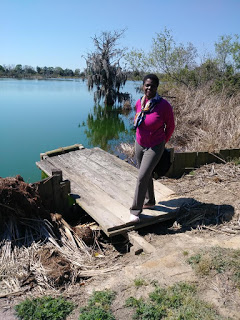 I am so thankful to my hosts at Georgia Southern University (Armstrong College) for an opportunity to share my work in Savannah alongside the amazing Gullah Geechee Ring Shouters.  I was honored to give the third annual Mark Finlay lecture on my book, The Weeping Time.  The Shouters, a singing group that recreates Negro spirituals and other traditional songs of the old South, really gave the audience a sense of the culture that was created in the crucible of slavery. They sang several songs including “kumbaya,” which has now been acknowledged to be of Gullah origin.  Below is an excerpt from the chapter of my book, “ More Than Hands:
African Rhythms and Work on the Butler plantations.”  The songs of the Shouters are reminiscent of the boatmen who perhaps enjoyed the most “freedom” as they ferried goods and people down the river from the mainland in Darien to the Butler island plantation estates.
Fanny Kemble, the plantation mistress, enjoyed the boatmen’s music and lyrics, even when they were at her expense. During her visit to the plantation, they gaily sang of her “wire waist,” in reference to her slim figure. They sang too of the haughtiness of her three- year- old daughter. “Little Missis Sally,” they would sing, “That’s a ruling lady.” 55 It seemed as if in song and good humor, they could get away with saying almost anything. And they did. The meaning of some songs, like boatman Cesar’s, was sometimes hard for Fanny to understand, yet Cesar and the slaves understood it well: “The trumpets blow, the bugles sound –oh stand your ground,” they would sing as if striking a defiant pose. 56
This African rhythm of plantation work was especially evident in the music played and sung by the boatmen and many other slaves. Some songs had more than an African rhythm; they were American versions of songs sung by their ancestors. Mrs. Amelia Dawley, a Gullah- Geechee resident of Harris Neck, McIntosh County, Georgia, taught the following song to her daughter Mary Moran, who, with the help of scholars, found the small village of Senehun Ngola where their family originated. There, thousands of miles across the Atlantic, they still sing the same song in the Mende language as a funeral song:
Ah wakuh muh monuh kambay
yah lee luh lay tambay
Ah
wakuh muh monuh kambay yah lee luh lay kah Ha
suh wileego seehai yuh gbangah lilly Ha
suh wileego dwelin duh kwen Ha
suh willeego seehi yuh kwendaiyah
57
Everyone come together, let us work hard
The grave is not yet finished, let his heart be perfectly at peace
Everyone come together, let us work hard
The grave is not yet finished, let his heart be perfectly at peace.
Sudden death commands everyone’s attention,
like a firing gun
Sudden death commands everyone’s attention
Oh elders, oh heads of family
Sudden death commands everyone’s attention
Like a distant drumbeat.
African rhythms thus played a major part in the world of plantation work, beginning with the driver’s blowing of the conch shell an hour before daylight and ending with the blowing of the same at sundown. Butler slaves knew the meaning of that call. Though it may have seemed that they had barely slept, it was time to labor in the fields, in the big house, in the rice mill and wherever else they were needed. Just as soon as the call went forth, it would not be unusual for a song to be heard. It was a song of hope and a song of encouragement for the day that would otherwise be dark with hardship.
Butler slaves knew many such songs. These were songs that their forefathers that had sung which helped them keep time and wile away the time during the long night that was slavery. When almost all hope was lost in this side of the world, they looked to the next:
‘E got ‘e ca’go raidy. Raidy. Raidy.
‘E got ‘e ca’go raidy.
Fo’to wait on de Lawd.
(He got his cargo ready.
Ready. Ready.
He got his cargo ready.
Just for to wait on the Lord.)
The African rhythms and the Gullah language, itself a mixture of English and African words, made for a powerful mix of pathos and hope. They were work songs, but they were often religious in nature too. These rhythms undergirded them from sunup to sundown and would touch every key in the emotional spectrum –from desperate sorrow to raucous humor accompanied with the stamping of feet and the waving of hands. These are the same songs of which W. E. B. Dubois would later declare: “I know these songs are the articulate message of the
slave to the world .” 60
Notes
55 Kemble, p. 142.
56 Ibid. p. 260.
57 “Amelia’s Song:  A
Song led them home,” Harris Neck Land Trust, www.harrisnecklandtrust1.xbuild.com/ amelias- song/ 4529751671, accessed October
28, 2016 . Scholars Joseph Opala and Cynthia Schmidt were instrumental in this
effort. A fi lm called The Language You Cry In was made of Amelia’s song
and its connection to the village in Sierra Leone.
58 Elieen Southernand Josephine Wright ,
African American Traditions in Song, Sermon, Tale and Dance, 1600’s- 1920 (
Westport, CT :  Greenwood Pub. Group ,  1990).
59 Shane Whiteand Graham White , The Sounds of
Slavery: Discovering African American History Through Songs, Sermons and
Speech ( Boston :  Beacon Press , 2005 ) p.  65.
60 Wilbur Cross , Gullah Culture in America (
Winston– Salem :  John F.  Blair Publisher , 2012 ) p.  205 and
Chapter 3 .
Anne C. Bailey
The WeepingTime: Memory and the Largest Slave Auction in American History (Cambridge
University Press, 2017) 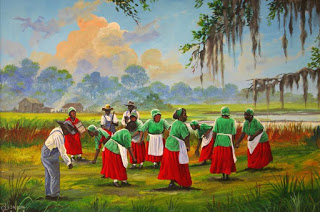 AN INTERVIEW WITH EDWARD T. O’DONNELL,  IN THE PAST LANE PODCAST